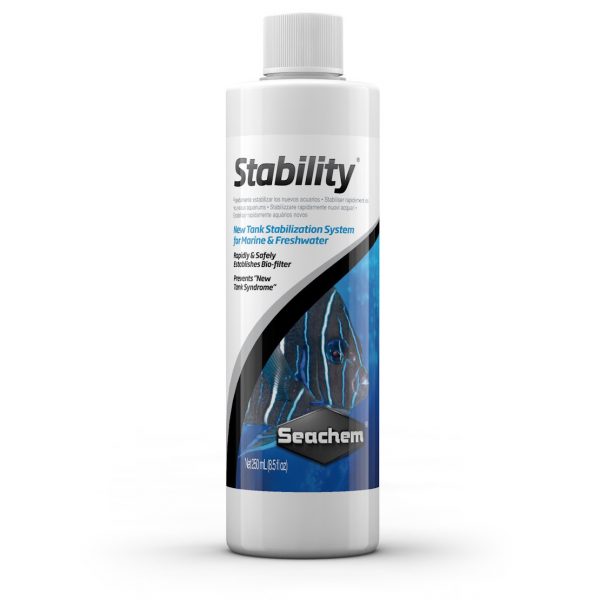 Stability® will rapidly and safely establish the aquarium biofilter in freshwater and marine systems, thereby preventing the #1 cause of fish death: “new tank syndrome”. Stability® is formulated specifically for the aquarium and contains a synergistic blend of aerobic, anaerobic, and facultative bacteria which facilitate the breakdown of waste organics, ammonia, nitrite, and nitrate. The bacteria employed by Stability® are non-sulfur fixing and will not produce toxic hydrogen sulfide. Stability® is completely harmless to all aquatic organisms as well as aquatic plants, thus there is no danger of over use.

Shake well before use. Turn off UV/ozone. Use 1 capful (5 mL) for each 40 litres on the first day with a new aquarium. Then use 1 capful for each 80 litres daily for 7 days. Fish and other aquatic species may be introduced at any time as long as dosage is maintained for 7 days. For optimum biofilter performance use 1 capful for each 80 litres once a month or with each water change and whenever introducing new fish or whenever medicating an aquarium. Product shelf life is 4 years from date of manufacture.

When dosing Stability™, how long should I turn off my UV filter or my ozone?

The UV and/or ozone should be kept off for the 7 days you are dosing if you are cycling or for at least 24 hours if it is for Stability™ additions of new fish or water changes. The reason both should be turned off is because UV and ozone break down and kill bacteria.

What is a reasonable amount of time to allow the Stability™ to come out of the spore state and find a home to attach themselves?

The bacteria should be able to find a suitable home within 24 hours.

I just finished cycling my new tank, but i made a mistake of introducing many fishes at the same time. i was wondering if i could use Stability™ to increase the bb’s for the increased bioload?

Yes, Stability™ will prove very helpful in removing ammonia and nitrite, including nitrate, as a result of the increased bioload. If your ammonia level is not at zero, a combination of Stability™ and AmGuard is very useful and great in reducing ammonia toxicity on the bacteria blend as the bacteria consumes the ammonia, nitrite and nitrate in the aquarium

Why does Stability™ not need refrigeration? If there’s living bacteria in the solution, how do they stay alive for so long? Or is there something else besides bacteria in the product altogether?

The bacteria in Stability™ are alive but not active. They exist in a spore form. They can withstand extreme temperatures and do not require food to survive. When you add them to your aquarium they become active due to dilution.

The bacteria that require refrigeration are active. Refrigerating them slows down their life cycle and they require less food when cold. Because they are active they do require food, and that is packaged with them. They also will not survive extreme heat or cold and will die when they run out of food.

Can Stability™ be overdosed?

It is very hard to overdose Stability. You can really never have too much beneficial bacteria. The worst thing that could happen is a bacterial bloom in the water column, but this is rare and will clear on its own, should it occur.

I have finished the suggested 7-day dosing, however, my tank is still not fully cycled. Why?

Since every tank will cycle differently, it is difficult for us to give an exact time frame as to when your tank will be fully cycled. However, generally most tanks are cycled within 4-6 weeks.

If I plan to do a fishless cycle and use Stability™, do I need to add an ammonia source to kick-start the nitrogen cycle?

Yes, for expedited cycling times, you will want to add a pinch of food daily until you have an ammonia reading. At that point, you can stop adding the food and let the bacteria run its course. 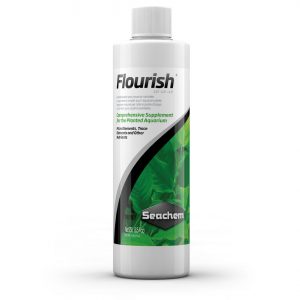