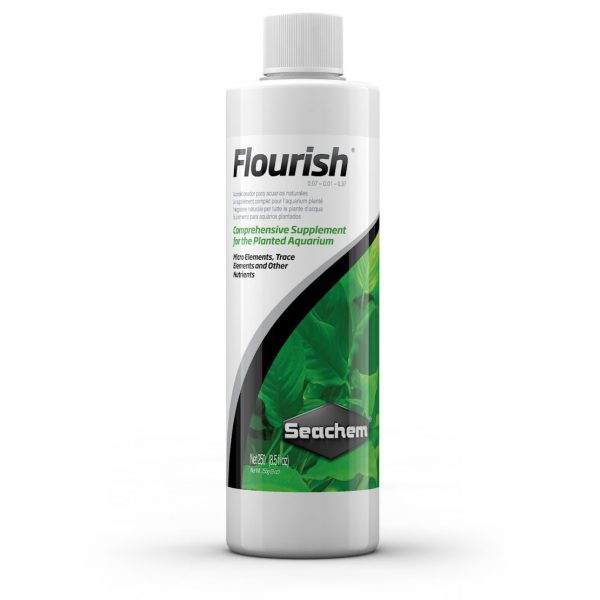 Flourish® is a comprehensive plant supplement for the natural freshwater aquarium. It contains a rich assortment of important micro elements, trace elements and other nutrients. These include calcium, magnesium, iron and other important elements that have been shown to be beneficial to aquatic plants.

Use 1 capful (5 mL) for each 250 litres once or twice a week. For smaller doses, please note that each cap thread is approximately 1 mL. Refrigeration is recommended 3 months after opening.

The most recent bottle of Flourish® I purchased looks like a much darker color than the last bottle. Should I be concerned?

It is normal for the color of Flourish® to vary from batch to batch as this is dependent on the temperature that this product was blended at. This is of no consequence to the function of the product.

Is the “guaranteed analysis” on Flourish® per dose?

Per dose, per bottle, per whatever unit of weight you choose; it is expressed as percentage by weight not in absolute weights.

Can I use Flourish® on my garden vegetables?

Our products are strictly intended for aquarium use and have not been tested on anything intended for human consumption.

I have a question about why you have phosphates in your Flourish? This is the #1 culprit in algae in aquaria.

I believe if you check the amount of phosphorous content (< 0.01%) you’ll see that at our recommended dosing this would only add 0.0005 mg/L (ppm) of phosphate to the water. This is completely negligible and poses absolutely no risk of algae growth. So unless you are planning on a 1,000 fold overdose you don’t have to worry about ever getting any measurable phosphate from using Flourish. We don’t sell Flourish® as a macro element supplement which is why the phosphorous, nitrogen and potassium levels are as low as they are.

I see that Flourish® contains copper. Is it safe to use with shrimp?

Yes, Flourish® is safe to use with shrimp. It is true that in large amounts, copper can be toxic to aquatic animals and invertebrates like shrimp and snails can be particularly sensitive. However, copper is needed in trace amounts by both plants and animals, including shrimp, which is why we include it in Flourish, Flourish® Trace, and our other Trace products. The amount of copper in Flourish® is so small that you would have massively overdose before you would begin to approach an amount of copper that is toxic to even the most sensitive animals. There is usually much more copper in tap water than there is in Flourish.

Used as directed, Flourish® will not alter pH. 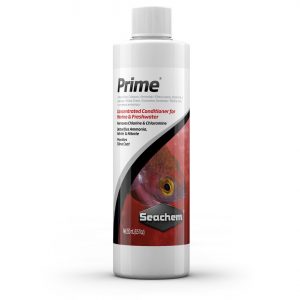